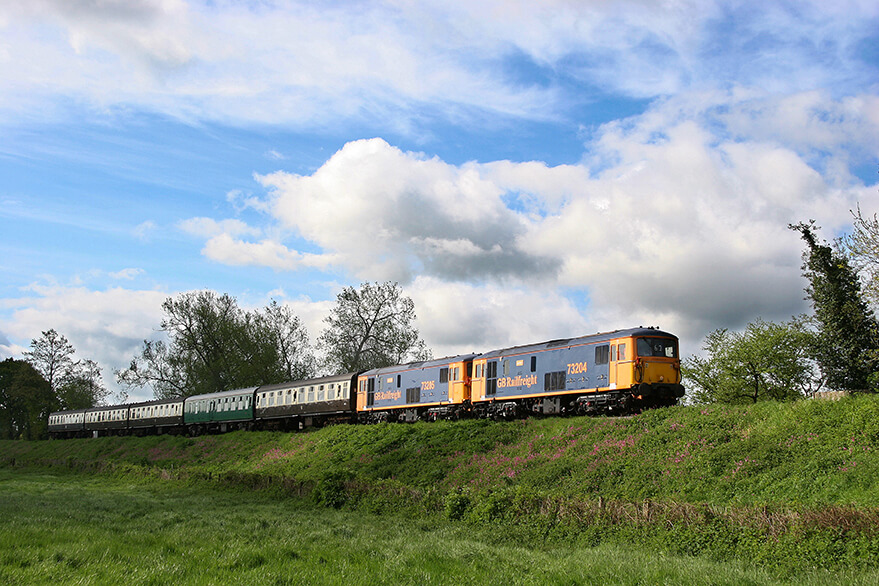 The Gala Planning Team are very pleased to be able to announce some further visiting locos for our June 20th – 23rd diesel gala to complete our line up for this years event.

We have now secured the use of Class 31 No. 31163, which is currently running in RTC colours as 97205, courtesy of the team at the Chinnor & Princess Risborough Railway. Along with the 31 are two GBRF Class 73/1’s, which have very kindly been loaned to the WSR for use at the gala free of charge by our friends at GB Railfreight.  These three locos are planned to arrive on the WSR in a rail movement from Kidderminster (SVR) worked by GBRF and likely to bring a Class 50 to the line. Unfortunately current restrictions on the lines axle loadings mean the 50 will have to remain on display at Bishops Lydeard.

Despite the recent disappointments over not being able to host the larger locos originally planned we now feel we have the makings of a good weekend and hopefully you’ll want to visit the line and support the WSR on its road to recovery.

The Gala Planning Team are very pleased to be confirm that an old WSR stalwart from the past, in the form of Pannier No. 6412, will be returning to the line for the 40th anniversary of reopening between Stogumber and Bishops Lydeard gala on 8th/9th June 2019. The loco is kindly being loaned for a return visit to the WSR by the South Devon Railway.

This loco will be joined by several other locos form the WSR home based fleet, including 7F No. 53808, which was already based on the WSR although under restoration back in 1979 and Hymek No. D7017 which hauled a number of the services on 9th June 1979 following the failure of one of the Bagnall Saddle Tanks then working many WSR services. The DEPG Hymek has now spent over 40 years based on the WSR, far longer than its 13 years with BR Western Region. The full loco line up is yet to be confirmed but is planned to also include visiting Class 37 D6948 and at least two others from our steam fleet.

This promises to be a great weekend on the WSR as we celebrate what has already been achieved since 1979 and look forward to a brighter future.