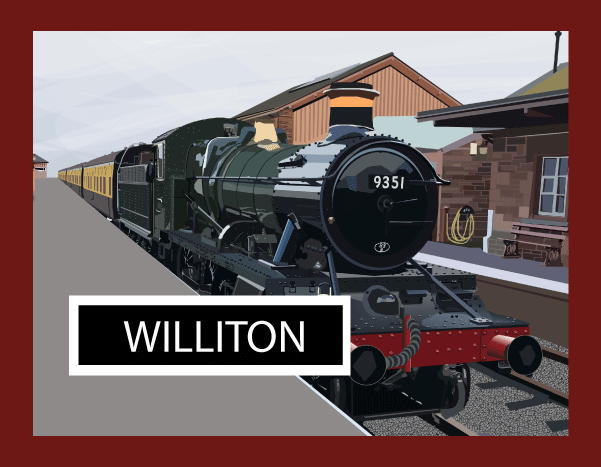 After being shut for exactly one full year today (Wednesday 17th March) as a result of the Covid-19 pandemic lockdown restrictions, the West Somerset Railway (WSR) has confirmed its outline programme for a late Spring re-opening of the 22-mile heritage line running from Bishops Lydeard near Taunton to Minehead.

The West Somerset Railway is planning to re-start train services on Saturday 22nd May subject to no further Government CV-19 restrictions being enforced and the recovery roadmap staying on track.

Initially, WSR trains will operate out and back from Bishops Lydeard to Williton only. Social distancing regulations will still be in force then and passengers will, therefore, need to travel in pre-allocated seats and remain on board for the entire return journey, similar to the WSR’s Santa services last December.

As a result, it will not yet be possible to offer train services to any intermediate stations on the line, or through to Minehead yet sadly, and which the WSR regrets.

Extensive key infrastructure works between Williton and Minehead, including the rebuilt Seaward Way Level Crossing at the seaside town, have yet to be completed but are on track for a July opening when all CV-19 restrictions have hopefully been lifted.

WSR trains will be fully internally cleaned between services, and seats will need to be pre-booked either on the WSR website on the internet, or by ‘phone to the WSR’s Minehead offices. Advance on-line bookings are open now.

In order to enhance the passenger offering, a range of at-seat catering options will hopefully be made available on Wednesdays and Saturdays. These are anticipated to include food and drink choices on different services such as morning tea, coffee and cake, lunchtime fish and chips, and afternoon cream teas. Further catering options will be made available later on in the season on specific dates, as in previous years.

As Government restrictions are gradually lifted, the WSR expects to extend the services on Saturdays only to Watchet and Blue Anchor.

The newly rebuilt level crossing at Minehead is expected to be available from July and which the WSR hopes will coincide with sufficient flexibility in CV-19 arrangements to enable it to reopen the entire Bishops Lydeard to Minehead line.

If CV-19 restrictions remain in place, however, it will be necessary for passengers to have fixed return journeys to specific destinations.

With all of the uncertainty for the year ahead, it may not be possible to carry out many of the popular, quality events that the WSR normally offers, but it intends to announce these later in 2021.

That said, it’s likely that the 1940s weekend will go ahead in some form over the  weekend of 11th and 12th September, along with hopefully normal Christmas services planned to recommence at the beginning of December.

Prior to the re-opening to passengers, several pre-opening trial and test trains will operate in order for safety critical staff to have refresher duties and receive updated operational information. These trains are expected to start running in mid to late April.

WSR staff, including volunteers, have been undertaking a variety of remote training over the closed-down period. Whilst this serves a very important role in keeping people up to date, clearly there is a need for practical re-familiarisation with trains and with the line.

Full details of passenger times are available on the WSR plc website: www.west-somerset-railway.co.uk

“By far, this has been the longest enforced period of closure for the WSR since the full reopening of the whole heritage line from Minehead to Bishops Lydeard in 1979, apart from the short exception of our 2020 pre-Christmas period.

“Much hard work has been undertaken in the background by our dedicated teams on all aspects of our working steam railway. Now, we are all greatly looking forward to welcoming passengers back to enjoy our wonderful railway running through the Somerset countryside again this coming summer.

“Re-opening on 22 May is our plan for now and we are fully hoping that the Covid 19 situation improves soon for everyone. When, and if, the Covid restrictions start to lift, we will amend our plans to suit the situation at that time, and issue updates as soon as we have confirmation of a change in circumstances.”

WSR steam trains were due to re-commence on Saturday 20 March last year, but visitors had naturally deserted the West Country by then and the first lockdown took place from that weekend.

So, it’s now the longest period that the longest standard gauge route and former GWR branch line has been closed in its 45-year history after first re-opening as a tourist railway in 1976 from Minehead to Blue Anchor following closure by British Railways in January 1971.

The WSR plc Board has determined that the line can only re-open in a way where passengers and staff are safe from the Covid virus, but also by which the WSR makes some money from running trains too.

The railway now has to generate enough money to get it through next winter, and the Board is clear there is no point in making a loss and pretending that money isn’t important, especially given its recent history which the plc has traded its way out from.

The WSR expects to be running back into Minehead at the end of June or early July. At the moment all this is provisional, not least because the Government dates are set to be reviewed as the virus infection rates become clear.

As soon as firm dates for each development are known, this will be announced on the West Somerset Railway website. In order to achieve social distancing on trains, and avoid crowding on platforms, trains will have to operate for at least the start of the season as “excursion trains.”

What this means in practical terms, is that passengers will have to pre-book (on the internet, or by ‘phone) and will be allocated seats. The booking will specify a particular timed train, out and back.

For the high season, after more experience with this limited type of operation has been gained, the WSR will be looking at the possibility of an intermediate “walk up and go” all stations operation, possibly with the Diesel Multiple Unit.

But social distancing is going to have to be the watchword, for as long as it is recommended by the Government and it will take time.

The WSR is putting in a range of measures to ensure that customers can travel on trains in confidence and safely.

This includes reduced capacity on trains, all tickets booked in advance, socially distanced passenger flow systems, hand sanitisation stations and enhanced cleaning regimes. Unless visitors are exempt on health grounds, the WSR is are asking everyone to wear face coverings on its stations and trains.

Getting things ready to roll……..and the money side of things!

During the enforced closure of the last 12 months, the WSR has carried out considerable, necessary planned maintenance and improvement works all along the line and using socially distanced work teams, ranging from stations, signal boxes, undergrowth removal and track repairs to signalling, coach and loco repairs, plus endless cleaning so that everything is ready for re-opening again.

The Cultural Heritage Recovery Fund (CHRF) grant monies received from the Department of Media, Culture and Sport’s (DCMS) programme  last year have been spent on a wide range of projects listed on the attached CHRF pdf update document.

The WSR has submitted another six-figure bid (£432,200) for Round Two CHRF funding with a hopefully positive announcement anticipated later this month on 23 March.

All told, the WSR has raised some £1.397 million (@£1.4 million) from all sources so far to try and safeguard the railway’s future – an impressive total of hard cash support from its supporters, shareholders, staff, external and internal funding organisations, plus local and central government grants.

All of this money is going to be needed for survival now, but the appeal is still bringing in more cash every single week after running for a year! A great achievement, but the appeals for future funds will have to continue.

The WSR’s next ambitious funding target is to try and reach £2 million if possible, and the second CHRF fund bid succeeds, and then try and raise £1 million each year thereafter in donations and grants for ongoing infrastructure investment.

The WSR also has one eye on its future structure following publication and consultation about last year’s ‘Bailey Report’ recommendations which could set out an important new approach to running the railway.

But the scale of the massive financial hit taken by the WSR over the last year can be seen in the WSR’s comparative passenger figures which reveal that just 3,003 passengers travelled on the line in 2020 compared to 155,198 in the shorter 2019 season, a staggering drop of  98%, and it has lost an estimated £3 million in revenue overall.

The WSR’s impressive £1.4 million approximate funding total includes the WSR plc’s own emergency appeal for donations and share appeals, which now stands at a very creditable £209,574.26.

Despite the massive losses incurred so far, the WSR’s family community of staff, volunteer workers, supporters, enthusiasts and local people alike is optimistic that it can run profitably again in 2021, albeit with a much shorter season than usual from late May onwards.

WSR plc Chairman Jonathan Jones-Pratt added: “It certainly seems like a very long time since our railway was fully operational, despite the short period of working just before Christmas. But now we really can plan to move things forward.

“We still have much more planning to do, but we expect to start passenger operation on Saturday 22nd May. Initially this will be Bishops Lydeard to Williton with some trains to Watchet. We hope then to run further with an extension to Minehead later in the summer.

“I’m really grateful for the extraordinary support the railway has received over the last year or so. It is no exaggeration to say that we would not have survived without this support in all sorts of ways.

“It will take quite a while before we can say that the railway is totally secure for the future, but we have made great progress.

“In the closed period, we have worked to develop our infrastructure, our rolling stock, including coaches and locomotives and, very importantly, our safety approaches and documentation.

“We will continue to run an authentic historic steam railway, and we can show 21st century approaches to safety of operation. The West Somerset Railway has a really bright future, and this summer, once again, we will be running steam trains to the seaside. I really look forward to that day.”

“Whilst some other heritage railways are planning to start train services earlier than 22nd May, many of them use compartment coaches which we lack. However, after much careful consideration of the Government’s roadmap to easing lockdown, we believe our decision is prudent for a predominantly indoors attraction that sees different households within the same indoor space.”